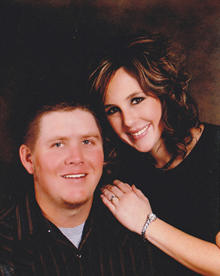 The first time was the sinful woman who anointed His feet with her tears and perfume. Simon the Pharisee disagreed with this woman’s actions toward Jesus because of her sinfulness, but Jesus made it clear that her many sins were forgiven. Jesus told her after her act of worship, “Your faith has saved you; go in peace.” (Luke 7:50)

The second time it was the woman who had been subject to bleeding for twelve years. She pressed through a massive crowd and all she did was touch the edge of his cloak and she was immediately healed. Can you imagine the amount of faith it would take to do that–to truly believe that just touching the garment of Jesus would heal you? Jesus said to her, “Daughter, your faith has healed you. Go in peace.” (Luke 8:48)

Let’s consider the lack of peace both of these women must have been dealing with. The first woman was likely haunted by guilt and shame. Maybe she found it impossible to escape her sins. Even when she sought after Jesus and the forgiveness from sins she had heard about, she was met with judgmental stares and snarky comments. I’d imagine she constantly walked around with her head hung in shame and an overwhelming feeling of unworthiness.

As for the second woman, imagine the lack of peace you would feel as you bled continuously year after year. If you have ever dealt with any form of chronic health issues, you know how it steals your peace. You are consumed with thoughts of how you are ever going to overcome it; fearing the future and constantly fighting the feeling of defeat.

Both of these women experienced Jesus in such a way that their faith radically changed them.  The result–the ability to move forward in peace.  Peace of mind and soul was theirs through their faith in Jesus. “Peace that surpasses all understanding” would guard their hearts and minds against guilt, shame, unworthiness, worry, pain, anxiety, despair and defeat. (See Philippians 4:7) .  But in order to take hold of that peace, both of these women had to move forward in faith, truly believing what Jesus had done for them.

The sinful woman had to truly believe that her sins were forgiven.  Then, and only then, would she be able to mute the opinions of Simon the Pharisee and others who would judge her for her past.  The woman who bled would have to truly believe that healing was hers.  She couldn’t move forward constantly questioning if she was really healed or if the issue would return.

Faith in Jesus brings peace of mind and soul.  You just have to believe it. Believe Him!  Believe that He is who He says He is, and you are who He says you are!

You are one of those daughters.  Jesus is well aware of all those thoughts that are crowding your mind and robbing you of peace, but he is gently lifting your chin to meet his gaze and saying to you, “Daughter, your faith has saved you. Go in peace.”